On the 7th of May 2015, the road trip we had been waiting for began, we had packed up for three and a half weeks away, loaded the car with supplies, a stove, a few foam pads and a duvet and after running a few errands, we were off. It was snowing of course; Classic Montana farewell.

For the first leg of the trip, we were joined by our friends; Ben and Juliet – fellow exchange students from the UK who were also travelling for the month! Idaho has not been our favourite place so far due to the incident where we broke down and got stranded so we were excited to make some new memories there with friends.

It was one of the longest drives of our whole trip but we were kept entertained by This American Life podcasts, journal writing, random games and lots of singing as well as a stop off at a Montana Rest stop for a snack lunch, cartwheeling and gopher watching which caused much entertainment as they popped their heads in and out of the ground.

Late afternoon, after a 5 and a half hour drive, we got our first views of the beautiful lake that Coeur D’Alene is famous for, it was a lot bigger than we had expected and surrounded by evergreen trees, with docks bobbing on the water, boats on the horizon, houses peeking out of the foliage and the road that wound around the side of it, leading us to our destination: The shore.

Coeur D’Alene was beautiful, a place on our itinerary as a stop off; a throw away destination to spend the night due to its no restriction Walmart parking lot and hearing through the grape-vine that it was a nice enough place when in fact, it was one of the prettiest, most unexpected finds of our trip. The weather helped a lot, blue skies and sunshine, making us feel like it was mid summer, as we wandered down the lake side, testing the temperature by dipping our toes in the icy water, frolicking on the sand and feeling like we were in Italy or Switzerland.

A wander around town was also in order, so we explored the streets, amazed at how many people there were, spilling onto outdoor patios, enjoy drinks and nibbles and time with friends, it was positively buzzing. There were also pretty views of the harbour, with the light perfectly catching the water, glistening on the ripples. We found a beautiful square with blossom trees and painted murals, with graffiti instructing that there be ‘no panhandling’ in the area. Ben found a moose to sit, while the rest of us looked on and laughed, and after a little more walking, we got too hungry to wait any longer so headed back to the car to grab our stove and food.

We cooked our dinner in a park beside the lake, making the first of many delicious feasts on the trip of cous cous, and a veggie bean stew washed down with beers, though after quickly realising that none of us had bottle openers; Juliet ran across the park to source one from a group of BBQ-ers. We also vowed that the following morning, we would have a swim in the freezing fresh water, being as british as we could, with the want to jump right in! 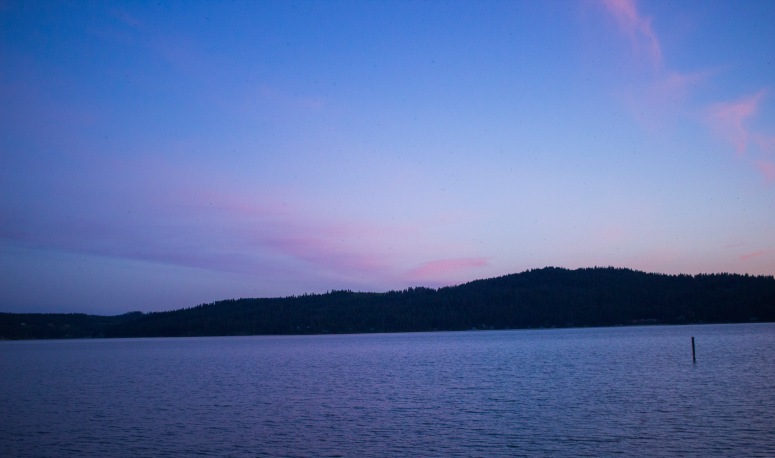 The night in the car was an uncomfortable one due to the fact that there were four of us sleeping in it, with Ben and Juliet taking the two front seats that lay back, and Sean and I squashed into the back surrounded by backpacks, a tent (maybe should have used that) and an assortment of other objects. We also had to lie parallel to the seats rather than straight down, so were folded in half like pretzels for the night. We did, however get some sleep and soon it was wake up time, and off for a morning dip in the lake. But before that, we heard news of the British General Election Result and discussed the outcome. What a strange place to find out what the future of your home country’s government holds. We drove back into town, and walked straight down to the shore. The water was absolutely freezing, and could only be withstood for a few minutes, but we tried and it did feel very refreshing and invigorating which was exactly what we needed after the poor night of sleep. We were called out by some locals for being both brave and stupid which was amusing as we shivered and shook, trying to regain the circulation in our legs.

It was a sunny morning though, so we soon dried off feeling like we were on a holiday, in the depths of August not the beginning of May! It was also pretty empty as the summer tourist season had not yet begun. I would definitely recommend taking a trip like this around May as it seemed pretty perfect timing throughout our trip.

We rewarded ourselves with bagels on the beach for breakfast before taking a hike around the local wooded trail; Tubbs Hill.  Of course, getting lost in the process was part of the adventure and we saw some awesome views as well. It was quite steep in parts, but well worth it and nice to stretch our legs before another long drive. Our morning ended with a gander in a souvenir shop with Sean and I buying our first postcard for the tradition we wanted to start; getting one in every place and writing memories on them. Spoiler: We didn’t remember to buy postcards for it again until Moab, Utah, one of the very last stops on our trip three weeks later…Ooops.

And then we were off, waving goodbye to the beautiful lake and quaint little town of Coeur D’Alene. More adventures and stories to come. Next up: Seattle and Lake Washington! [Photos by mainly by myself and a couple from Ben + Juliet’s collection!]